I've decided to start publishing software development specific posts on this journal. Previously, they would go into my dev blog. But nowadays, I feel like that's too much work — maintaining multiple websites that is. So, in the interest of simplifying things, for 2021 at least, software development posts will start showing up here.

While I've already had this idea in my head for the past few months, I was also inspired by this post from Angelo.

Content moved to... Hide HTML Element Without Taking Up Space

I started working on an ASP.NET Core MVC website wrapper for this journal. I'm using the WriteAs.NET library that I wrote, to essentially turn Write.as into a Headless CMS. So far I have it working for my pinned pages.

Here is a screenshot of the About page rendered using ASP.NET Core MVC: 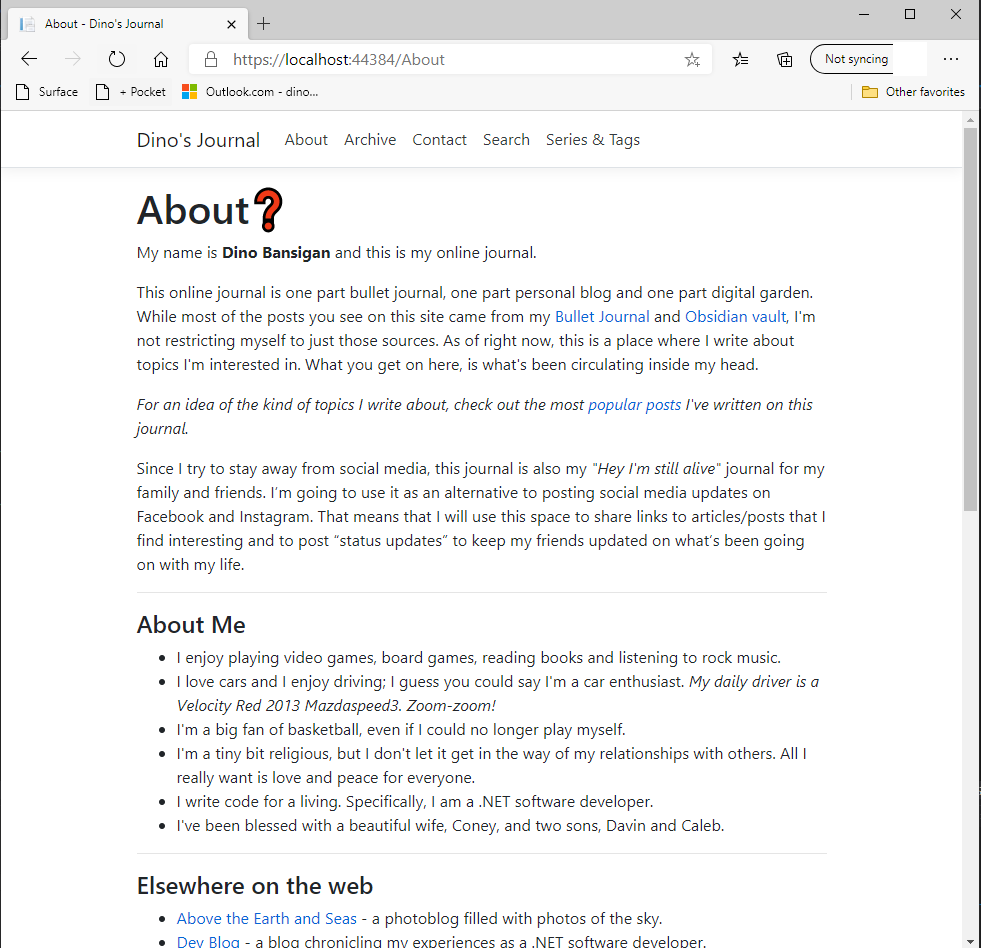 And the Archive page: 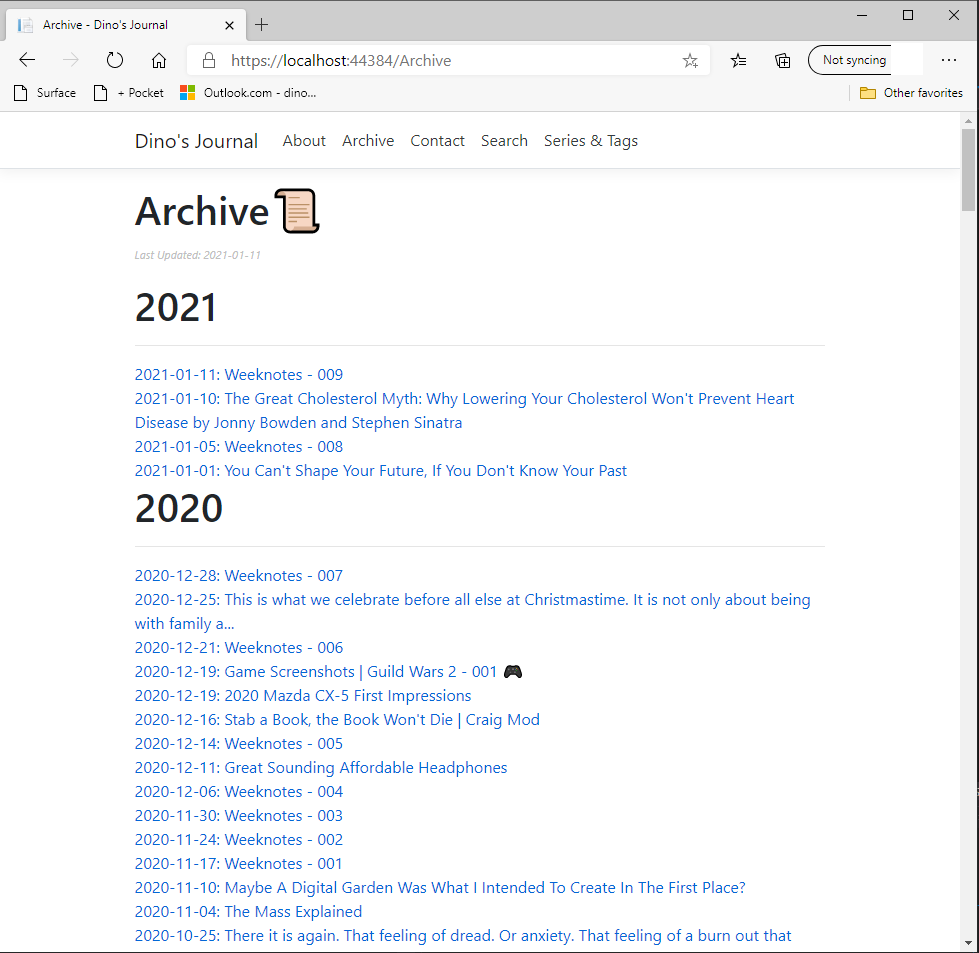 While working on this ASP.NET Core MVC website wrapper, here's another idea I had: Use it to practice Vertical Slice Architecture.

Better late than never. Found some good rock songs after listening to the Top 50 Rock Songs of 2020.

Got the Mazdaspeed3 back last week. Unfortunately, they couldn't reproduce the issue with the ticking noise on the AC fan. To be fair, the sound didn't manifest itself on my way to the dealership.

Fortunately, they did not charge me a diagnosis fee. That would have cost me $99. That's one benefit of developing a relationship with the service department. They treat me like a VIP. One of the perks I've noticed is that they are willing to waive charges and fees more often than not.

Note making is creating your own version of what you're reading. If you take the time to do this, to write a thought or idea in your own words, this will help you understand and remember it better.

Taking this idea further — It is not enough then, to just write down notes into a notebook. If all you do is write it down word for word, chances are you still won't remember it later. You need to re-write it and phrase it in your language, to give your brain a chance to really process that information and make it stick.

While reading Chesterton and the Vocation of Our Senses, I ran into this wonderful poem by G.K. Chesterton:

Here dies another day During which I have had eyes, ears, hands And the great world round me; And with tomorrow begins another. Why am I allowed two?

A wonderful reminder that even in the midst of this pandemic, most of us are lucky enough to have one more day.

G.K. Chesterton said that even those who reject the doctrine of the Incarnation (like the Pharisees) are different for having heard it. The claim that God became one of us changes the imagination, compelling a reassessment of both God and the world. This odd assertion is made, implicitly or explicitly, on practically every page of the New Testament.

Therefore, when Jesus forgives the paralytic’s sin, the Pharisees respond that only God can forgive sins, thereby, despite themselves, professing faith in the Good News.

Huh. I never even thought of it that way. Even when trying to prove Jesus wrong, the Pharisees ended up proving him right. They were professing the Good News, they just didn't know it.

In the book How to Take Smart Notes, the author relays a story about NASA trying to invent a pen that works in space. They were successful of course, but that's not the end of the story. Apparently, the Russians ran into the same problem. How did they solve it? By electing to use pencils instead.

This is a great reminder to look to the past for possible solutions. And another reminder to not over complicate things.

Update 2/12/2021: I just run into a page that disproves the story. Apparently pencils could be a fire hazard in space, especially if the tip breaks off.

On that train of thought, it’s also making me reflect on my efforts to try and make a fountain pen work for me. Right now, compared to my gel pen, a fountain pen seems to be the complicated option.

Just realized that tinkering with your own personal website is like modifying your car — it's one way to make it your own. It's a way to make it stand out from the crowd by adding your personal touches to it.