I was looking at the wallpapers on my work PC and thought about how good looking the FD Mazda RX-7 is, even by today's standards. If only you could drive it and not worry about fuel efficiency, that would be great. Which also makes me think that it would be really cool if Mazda could bring it back as a hybrid or electric car. – For photos of nicely modded RX-7s, check out this post from Speedhunters.

A big method or function means that it could contain a lot more business logic than it's supposed to. Which means it might already be violating the single responsibility principle (as far as that method is concerned, that is). A bigger method means that a small code change inside that method has the potential to break more stuff. It also makes it harder to test.

The Field Notes pocket notebooks pair really well with the Zebra Grand Sarasa pens. I don't get smudges on it even if I don't dab my writing with a paper towel, which is what I have to do when writing on my LEUCHTTURM1917 Bullet Journal. To me it seems like their paper just absorbs ink better. There's also less bleedthrough compared to my Moleskine and LEUCHTTURM1917 notebooks.

Possible issue with my car when the new baby arrives. If we cannot install the infant car seat in the middle, then the wife will not be able to sit in the back with the baby. This is where midsize sedans are superior to compact cars, because they simply offer more interior room.

Trying to create a search page for my Online Journal (this site). I've had to learn how to use Glitch. Also, I've had to look into Python and Flask, which is what the Search app is using. Also Python or Flask, uses the Jinja2 template engine, which looks very similar to the Liquid template engine that Jekyll uses.

Got stuck in really bad traffic on the way to pickup Davin. Cars were not even moving at all. Turns out there was an accident at one of the intersections along the way. – It was so bad that some drivers even turned off their cars while waiting for any sort of forward movement. And of course I was stuck in that traffic with my manual transmission car.

Nearly got the Search page ready on Glitch. Had to learn a Javascript trick to disable a button if the textfield is empty.

Also took Allegra-D today, but it doesn't seem to be as effective as yesterday when it comes to my cough.

Spent more time trying to get my Search Page working on Glitch. I'm starting to really like this platform for building web apps.

Today Davin said, “Mom, I want Sonic chicken nuggets.” My wife thinks he was able to read the “Sonic” sign because of the Sonic game he plays on the iPad.

Had to stay late at work again to fix bugs. Sigh...

Wasn't feeling well this morning. Had the chills for some reason. Thankfully I felt better in the afternoon.

Had to work from home today, again.

Davin was waiting for me to take him somewhere, but I couldn't because I had to work. He was standing on his little chair behind me, trying to see what I was working on, when all of a sudden his little chair gave way and he fell down. I hope he didn't hurt himself when that happened.

I was annoyed, not at him, but was annoyed at having to work from home again. He would not have fallen had I not been working.

After Davin fell, he was sort of mad at me. I don't blame him. He asked for some milk, then went to the room and closed the door. It was more like him saying, “I'm done waiting for you Dad.” When I went to check on him, he already fell asleep by himself, with his shoes still on. – That sight broke my heart honestly. This work from home on the weekends thing, it is not really working out. Not for me, and not for my family. 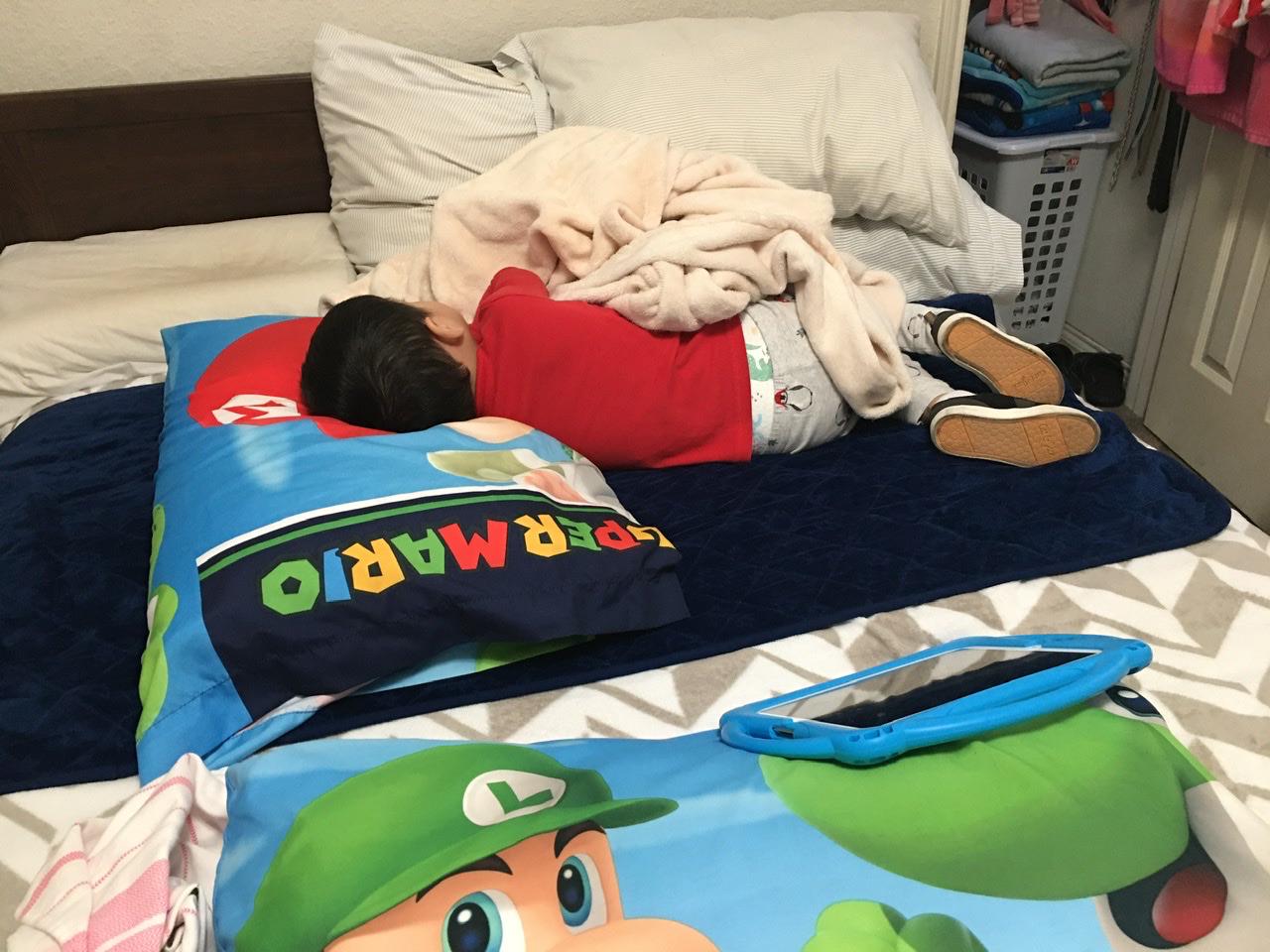 Poor Davin just wanted to go somewhere, but I couldn't take him anywhere because I was stuck working.

We didn't get to go see Christmas lights because me and Davin were still sick. We did drive by the venue after we picked up dinner and the line to get in was really long. We should just go there on a weekday instead.

I woke up and didn't feel sick anymore. I mean I was still congested, but it was the best I've ever felt waking up since I got sick last week.

We woke up early enough that we were able to go to Mass. After Mass we had family dinner at a Filipino buffet restaurant. Then we went to the mall to buy a gift for my dad. Then we went to Target to buy gifts for my nephews. Also, Davin really wanted to go to Target.

Trying out something new here, turning the dates into permalinks so each day can be linked to, instead of linking into the whole post itself. This is something that I've seen other bloggers do.

Update 1: Well that didn't really work out the way I thought it would, mainly with the preview post from my homepage. It works just fine when you're viewing the post. I'll fix it up in a bit.

Update 2: Fixed, but man that was a lot of URLs I had to type in. Too much work to be honest, unless I can figure out a way to automate it with Javascript.

Update 3: Took out the dates because I'm starting to feel they might be a privacy/security issue.